When a series returns, comparisons to its source material are inevitable. One great thing about Sex And The City was that it usually dove into one overarching theme per episode—whether it was religion or threesomes—with its main characters exploring different aspects of the theme under the canopy of Carrie’s narration. “Diwali” is the first And Just Like That… episode that hearkens back to that golden TV era, as it faces the question of moving on.

Everyone should keep changing and growing as we try to improve ourselves—yes, even (maybe especially) fiftysomethings. But what gets left behind when we do? Charlotte has to accept the fact that her daughters have outgrown the pink princess bedroom she decorated for them years ago. Carrie is stuck in the middle: Unable to stay in her old apartment, she moves too quickly into a new futuristic palatial one that doesn’t suit her at all. (Speaking as a Zillow addict who lives in the Midwest, how much do you think that apartment would actually cost in real life? Two million?). Miranda is also stuck, as to pursue her connection with Che (those fantasy sequences were the lowest part of the episode, directed by Cynthia Nixon herself), she likely would have to leave a large part of her old life behind. 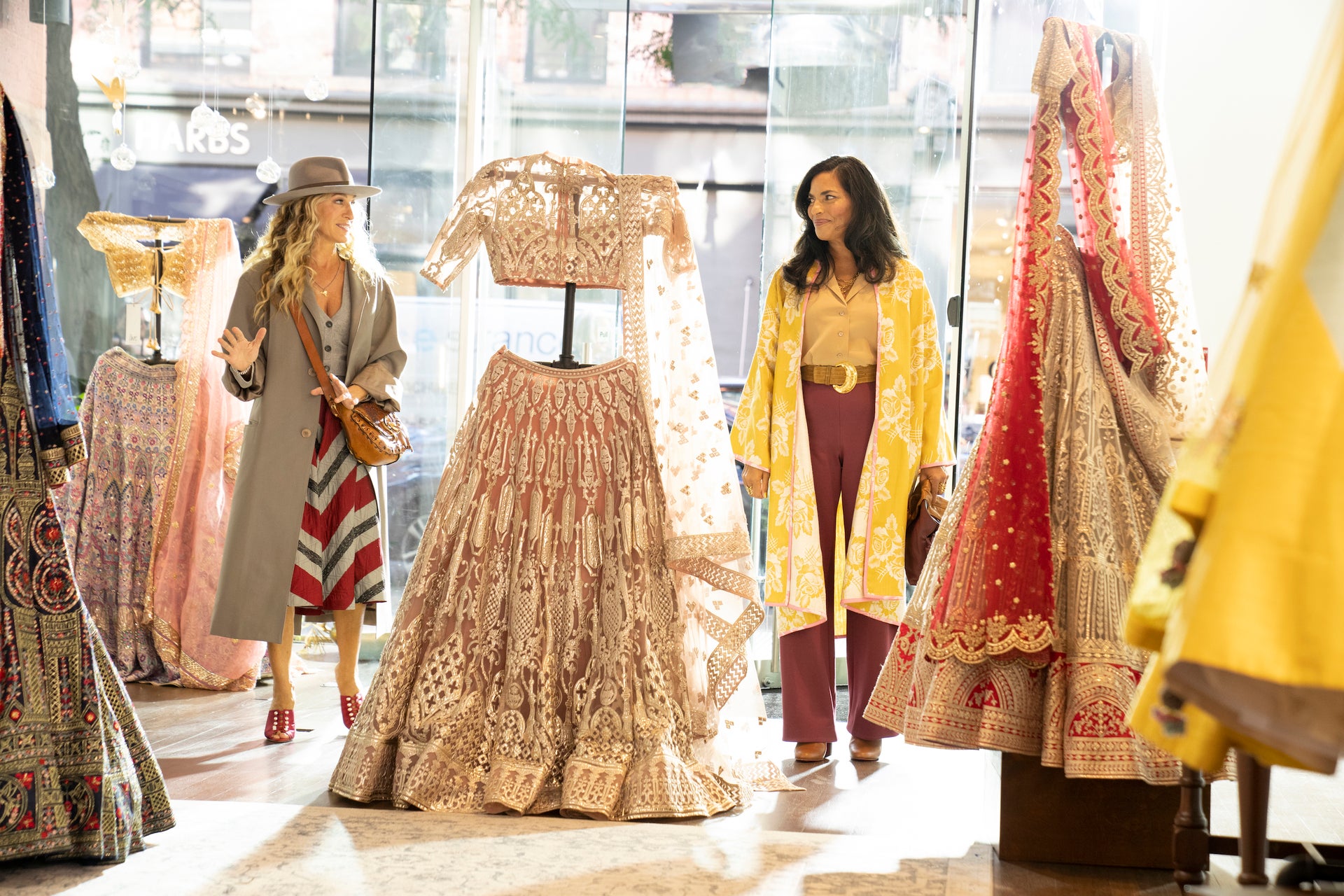 Meanwhile, our newer AJLT friends seem more trapped by societal constraints than anything. Seema is successful, loves her life, but just like her parents, she wants to see herself with a partner (just one that she gets to pick out herself). Nya is weighing all the options while considering whether to continue IVF treatments on the way to parenthood. Meanwhile, she gets a hard sell from “Fertile Myrtle” and her partner that having babies is the only viable option for a couple like Nya and her extremely cute husband. (As a vet of infertility treatments, I really liked this dinner scene; having to force enthusiasm for your friend who’s just announced she’s pregnant again while you’re still struggling is a social tightrope I had to walk many times.) Both Seema and Nya are trying to move forward, while attempting to shake rudimentary expectations behind.

Speaking of expectations, the inevitable Charlotte-Miranda showdown over Che unfurled in a typical manner. In an ever-changing world, Charlotte remains the same old Charlotte, railing against her friends’ decisions when they venture out from the staid privileged pasture she resides in. (Let us never forget her freakout upon catching Carrie and Big leaving a midtown hotel while he was married and she was with Aidan.) Miranda having sex with a non-binary person was enough to blow Charlotte’s mind a bit; still, I have no idea with “You are not progressive enough for this” is supposed to mean. But “What is wrong with people just staying who they were?” is like Charlotte’s mission statement—and an unfortunate one to have as you and your friends and your kids are all getting older. As a weary Carrie points out, everything can change in a second.

Against all of these rich storytelling opportunities, it’s a bit disappointing that so much of Carrie’s time was spent fighting an annoying beeping sound. At least we wound up at the titular Diwali celebration (I also liked Carrie’s respectful question about whether it would be appropriate for her to wear a sari), and Carrie coming closer to tying her past, present, and future. Yes, she could erase the past 15 years thanks to the magic of Dr. Jonathan Groff, but she doesn’t really want to. The best thing any of us can do is retain what’s valuable from the past and keep it with us going forward—like Carrie embracing Big’s records and using his jacket to top off yet another fabulous outfit.

Hopefully, these steps can help make Charlotte a bit more understanding about the changes her kids are going through, and give Miranda the ability to continue on her exploration without blowing up the life she’s already created (poor Steve). For Carrie, as the next episode is called “Sex And The Widow,” it looks like she may be finally ready to take an even bigger step forward in her life.

Things are worse than ever in Ozark's final season trailer

What's On TV, January 14 and 15: Apple TV Plus Tragedy Of Macbeth

Betty White suffered a stroke six days before her death

Turkmenistan figures it should try to close the "Gates Of Hell"

What The Matrix Resurrections Really Says About Video Games

What's on TV, 1/6: Women Of The Movement, Station Eleven, And Just Like That…

How I Met Your Father review: HIMYM sequel lacks spark